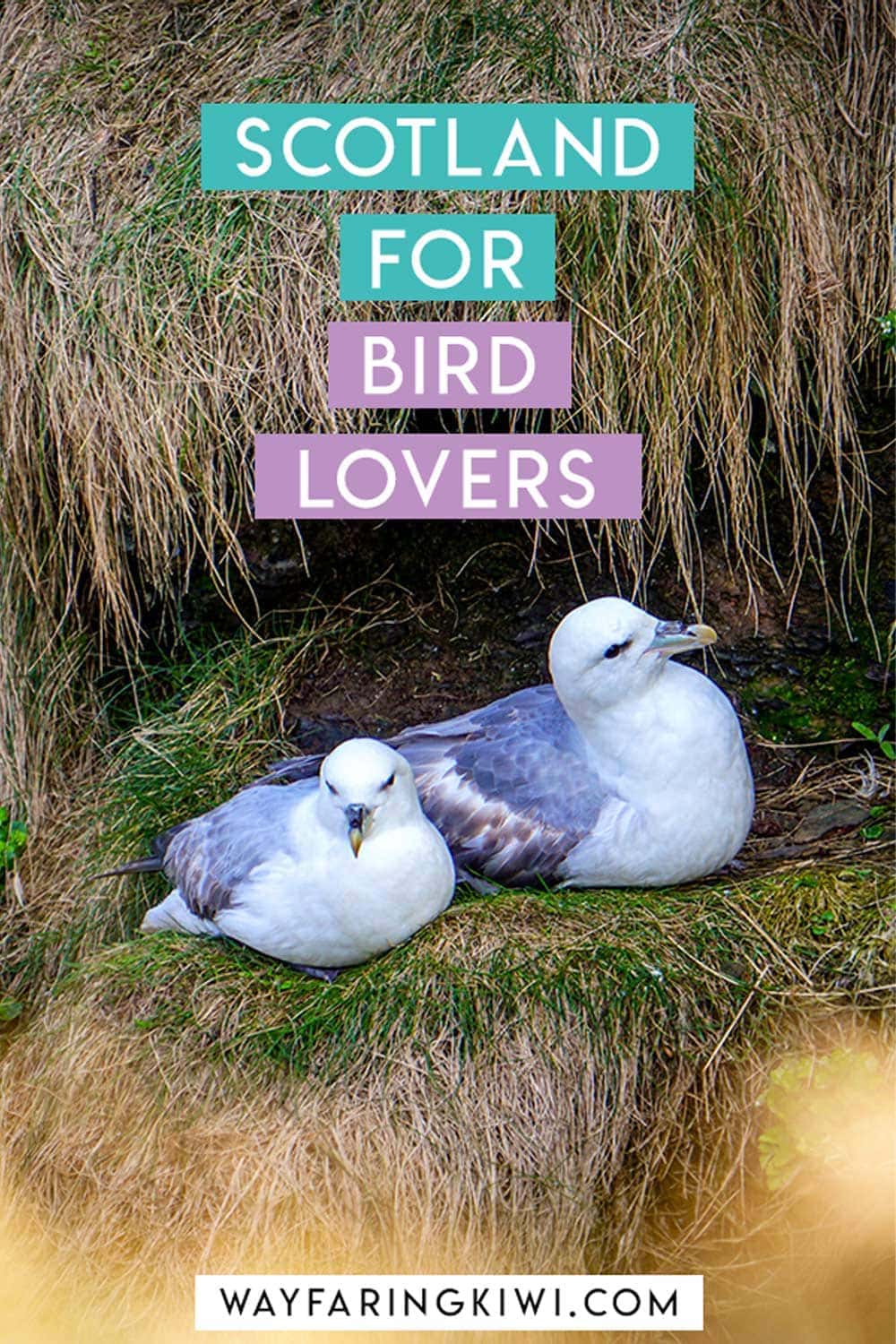 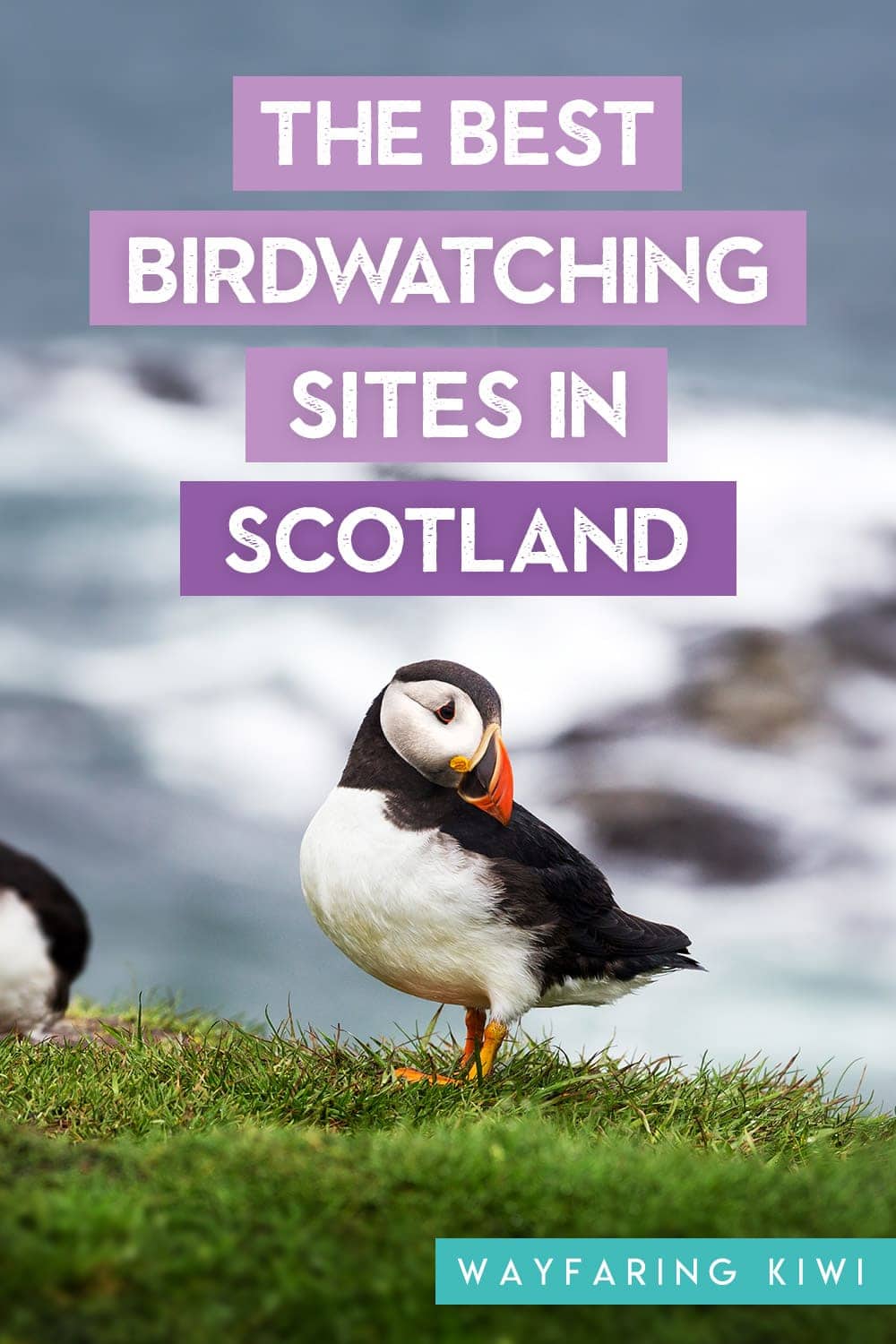 It wasn’t until I moved to Scotland that I became interested in bird watching or ‘birding’.

I love hiking in Scotland, and so it’s only natural that I became curious about the wildlife around me. Because I’m from New Zealand, the birds of Scotland seemed so foreign to me, and I developed a desire to find out more about them.

Luckily, there are some fantastic birding sites in Scotland to explore and learn more about Scotland’s bird life.

Whether you are a local or tourist in Scotland, I hope my list of the best birdwatching sites in Scotland will give you some inspiration to visit!

Handa Island was one of my highlights on the North Coast 500 and was the island that piqued my interest in birdwatching in Scotland. It’s a nature reserve and home to over 100,000 different species of birds during the breeding season.

Just imagine this- lying down on the warm grass and peering over the cliffs’ edge to see and hear the caw of thousands of birds as they make their nests in the rock faces. It was a truly magical moment I’ll never forget.

To reach Handa Island you take a 10-minute ferry from the port of Tarbet. After a short safety and information session, you can explore the island. It takes 2-3 hours to walk around the island along a well-worn path.

The Bird of Prey Trail

The Bird of Prey Trail is a self-guided trail that runs the length of the Outer Hebrides beginning at Loch Stiapabhat on Lewis and finishing at Craigston on Barra.

The Outer Hebrides is one of the most off the beaten track places in Scotland; it’s home to several different birds of prey and has one of the highest densities of golden eagles. There are 11 viewing locations along the trail and two ferry crossings. You can drive or cycle the 130-mile trail, or combine walking with public transport.

The Isle of May

The Isle of May is one of the best birdwatching sites in Scotland to see puffins and a variety of other birds that isn’t too far from Edinburgh or Fife.

Both trips last for around 4-5 hours in total which gives you enough time to explore the trails on the small island.

The best time to visit is in spring during nesting and breeding season, and in summer when the island is home to more than 250,000 birds! Grey seals also gather on the island to mate during autumn.

Read more: My guide on visiting the Isle of May

Staffa is an island that looks like something out of a Marvel film; windswept, wild and rugged, with otherworldly caves shaped by lava that have braved the elements and time.

It’s also home to an impressive flock of puffins from late April to early August! You can visit Staffa by catching a ferry with Staffa Trips and Staffa Tours. These tours depart from the Isle of Mull, Iona and Oban.

You’ll also get the chance to see Fingal’s Cave, a legendary sea cave made of basalt rock formed by lava.

Read more: How to Get to Staffa to See Puffins

As I mentioned before, the Scottish Seabird Centre is located in North Berwick, not far from Edinburgh. They have interactive live cameras you can control to see local wildlife up close, a cafe, gift shop and they also offer a range of seasonal boat trips.

They also have exhibits on local marine life and a virtual reality experience so you can ‘swim’ with dolphins. The Scottish Seabird Centre is a great activity for families or anyone interested in bird and marine life!

>> Read more: 30 of the best books about Scotland you’ll love

The Loch Garten Osprey Centre is located within the Abernethy National Nature Reserve in the heart of the Cairngorms. It’s the Royal Society for the Protection of Birds’ [RSPB] second largest nature reserve.

Osprey’s are one of my favourite birds in Scotland- and Loch Garten is one of the best places in Scotland to see them. Osprey make their nests right here at Loch Garten from early spring until September.to August or September. The centre is open seasonally when the osprey’s return to their nests!

You can catch a glimpse of the osprey’s and their nests from a viewing platform [make sure you bring binoculars] or on the CCTV cameras inside the centre.

The Scottish Owl Centre is located close to where I live in West Lothian. It has the largest collection of owls in the world with over 100 owls!

The Loch Lomond Bird of Prey Centre is located in the Loch Lomond and the Trossachs National Park. They have 34 birds of prey and owls across 26 species, including all five of the British owls. They have daily flying shows and an education cabin so you can learn more about the birds at the centre.

The Loch Lomond Bird of Prey Centre is just a 30 minute drive from Glasgow- making it an ideal half day trip from the city!

>> Read more: Overtourism in Scotland and where to go instead

Thank you for this post. Absolutely a bird watcher here.