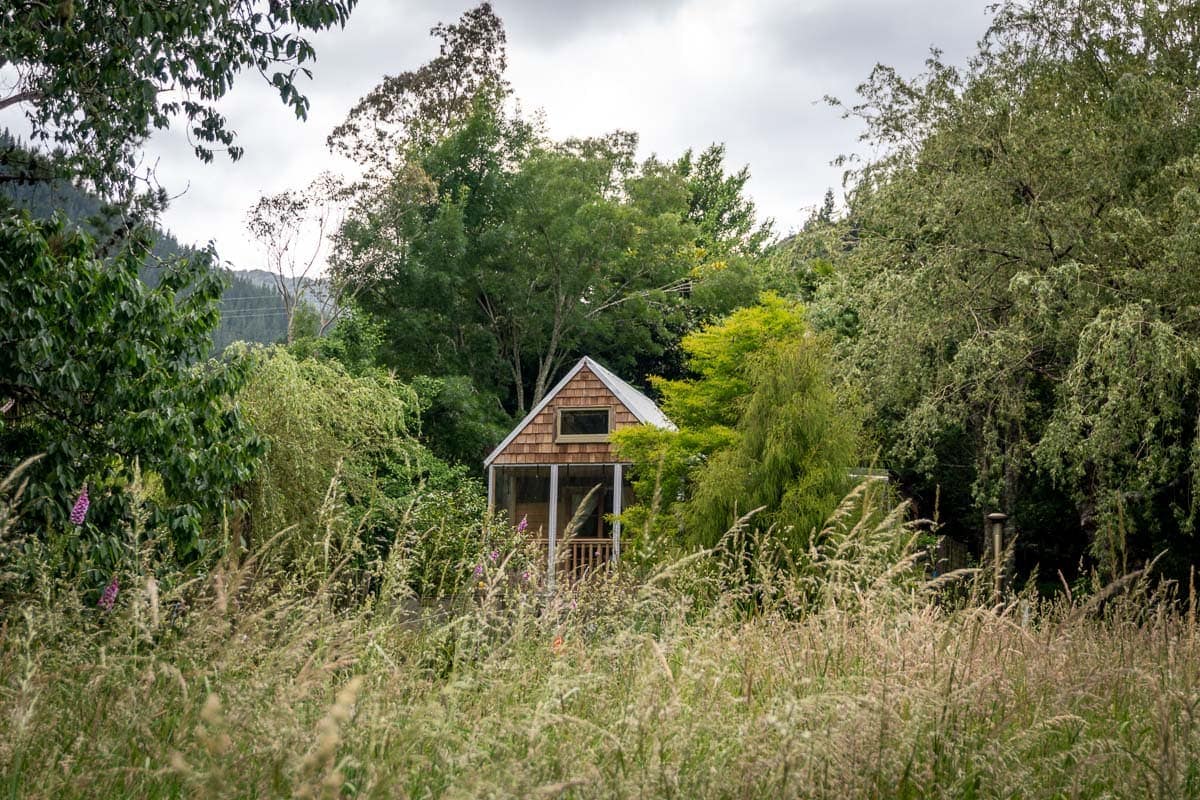 In December 2020, the Haggis and I caught the ferry to the South Island and spent two days exploring the north region of Marlborough. We road tripped around the dramatic coastline, went on a short hike to see the best views of Mahau Sound, and spent a night in the most blissful bothy on the banks of the Wakamarina River.

We were up before the sun when we stuffed our luggage in the car and headed south along State Highway 1 to Wellington. After spending a few days catching up with my parents in the Manawatu, it was finally my time to show the Haggis my favourite place in New Zealand: the South Island.

We didn’t have time to stop in Wellington, we had to be in line for the ferry by 8am at the latest. I spotted the ferry instantly; it was hard to miss the giant ‘Interislander’ scrawled across the side of the boat.

Soon we were seated on board, the car safely parked on the lower floor of the ferry, and we were crossing the Cook Strait towards the South Island, and our eventual destination: Canvastown, New Zealand.

After we helped ourselves to breakfast in the premium lounge, we hiked the stairs to the viewing deck where we were met with emerald blue waters, small islets and…wind!

The ferry cut through the water and wind like a knife, and within three hours we were had reached Picton, the heart of the Marlborough Sounds.

We stocked up on beer, cider and snacks at the liquor store and set off west along the coastal route. As our car climbed and wound around the edge of the coast, the views became more and more spectacular.

What should have taken us one hour to get to our accommodation, eventually became two, as I made Craig pull into every layby so I could stop and capture the moment forever on my camera.

We spotted a sign that said Cullen Point Lookout, so we pulled in to walk the 10-minute path to the lookout. The town of Havelock peeked through the trees on the western edge of the path, while the eastern side looked right down the barrel of Mahau Sound.

Every time the trees parted and offered us a view it stole our breath away. The water reflected the beaming blue sky; it was close to 30 degrees, and the wind from earlier in the day had evaporated. The clouds sat low in the sky, and the sun beamed down on us, browning our skin and causing beads of sweat to run down our backs.

Trees of palm and fern occasionally provided us with a reprieve from the sun. A tui landed on a low branch in front of us, and entertained us with his song. He flew away the moment I pulled out my camera. Dammit!

We hurried back to the car, anxious our sunblock had worn off, and desperate for a drink of water. We weren’t far from our accommodation in Canvastown. I was excited to show Craig the quirky place I’d booked for the night- and to relax with a drink in the hot tub!

Canvastown is a small town that was once home to gold miners in the 1860’s who sought their fortune in the Wakamarina Valley. It got its name from the tents that popped up amid the gold rush, after gold was discovered in the Wakamarina River.

Canvastown was home to at least 3,000 people during the boom, however today many people pass the town by unnoticed. There’s the odd house, but the main landmarks are the cluster of buildings that consist of a church, a second-hand shop and a hotel with a pub.

But Canvastown is a hidden gem well worth exploring. I believe the best places to visit in New Zealand are the quieter, more rural areas filled with charming locals and away from all the tourist traps.

My perfect idea of a weekend away is being tucked away in the middle of nowhere, surrounded by nature, and good company. Somewhere I can spend the day hiking or swimming, and in the evening indulging myself with a book in front of the fire, or washing my woes away in a hot tub. The accommodation we stayed at ticked all these boxes and more- let me introduce you to Riverside Bothie.

Riverside Bothie is a solar-powered hut immersed in native bush and nestled on the banks of the Wakamarina River.

The owners of the bothy, Aleeze and Alan, built it themselves on the site of an old gold miners hut. They greeted us when we arrived, along with their friendly labradors Jen and Reba.

They delivered our luggage to the bothy in true Kiwi fashion- on the back of their motorbike!

If you love glamping and nature- you’ll love this place. The bathroom, complete with a shower, basin and toilet, runs on solar power, and the kitchen is powered by gas cooking.

I have such an appreciation for Airbnb hosts that go the extra mile for their guests. Alan and Aleeze did just that- from the clear plastic panels that helped to keep the mosquitos out but didn’t spoil our view, to the fresh laid eggs that came from their chickens for breakfast. Aleeze even baked us a fresh loaf of bread!

They also give guests use of their two-seated kayak, and so Craig and I spent the afternoon paddling up the Wakamarina River.

After our adventure at the river, we went to the local pub for dinner.

The Trout Hotel is a uniquely Kiwi country pub. It had a classic wooden interior made from different native timber; the names of the trees were proudly displayed. Mugs and teapots hung from hooks on the ceiling, and a pool table sat in the middle of the room- clearly the highlight for the locals.

It turned out the building was over 100 years old, which is old by New Zealand standards!

When we entered the locals eyed us dubiously. We clearly were not from around here.

”Excuse me, do you serve food?’’ I asked the woman behind the bar, who was also eyeing us up.

”We’ve got burgers and shit.’’

Craig looked at me as if to say ”did she really say that?!’’

”Welcome to the country,’’ I said under my breath.

It turned out they had quite a substantial menu for a local pub; they had fish and chips, lamb, steak, and of course…burgers.

We ordered chicken burgers with fries and we both agreed- it was one of the best burger’s we’d ever tasted.

>> Read: Where to see Kiwi birds in New Zealand

Eventually, the locals warmed to us and when they heard Craig’s accent, they chatted to us about Scotland. It turned out one of the bar staff who worked there was also Scottish!

After dinner, we relaxed in the woodfire hot tub with wine, listening to the chorus of birds in the trees surrounding us. The calm, gentle call of the morepork contrasted the song of the varied and animated chatter of the tui. I stared at the starry sky, and let myself be completely taken by the power of nature.

I wished we spent longer here- one night wasn’t enough time to soak it all in. Spending a few nights here is the perfect experience if you’re in need of some downtime. I know we will be back someday.

⛴ Catch the ferry to Picton
? Drive the Coastal route [Queen Charlotte Drive] west
?‍♀️ Do the short hike to Cullen Point
? Spend a night or two at the Riverside Bothie
? Go kayaking down Wakamarina River
? Grab a burger and a beer at The Trout Hotel
? Relax in the hot tub while staring at the stars!