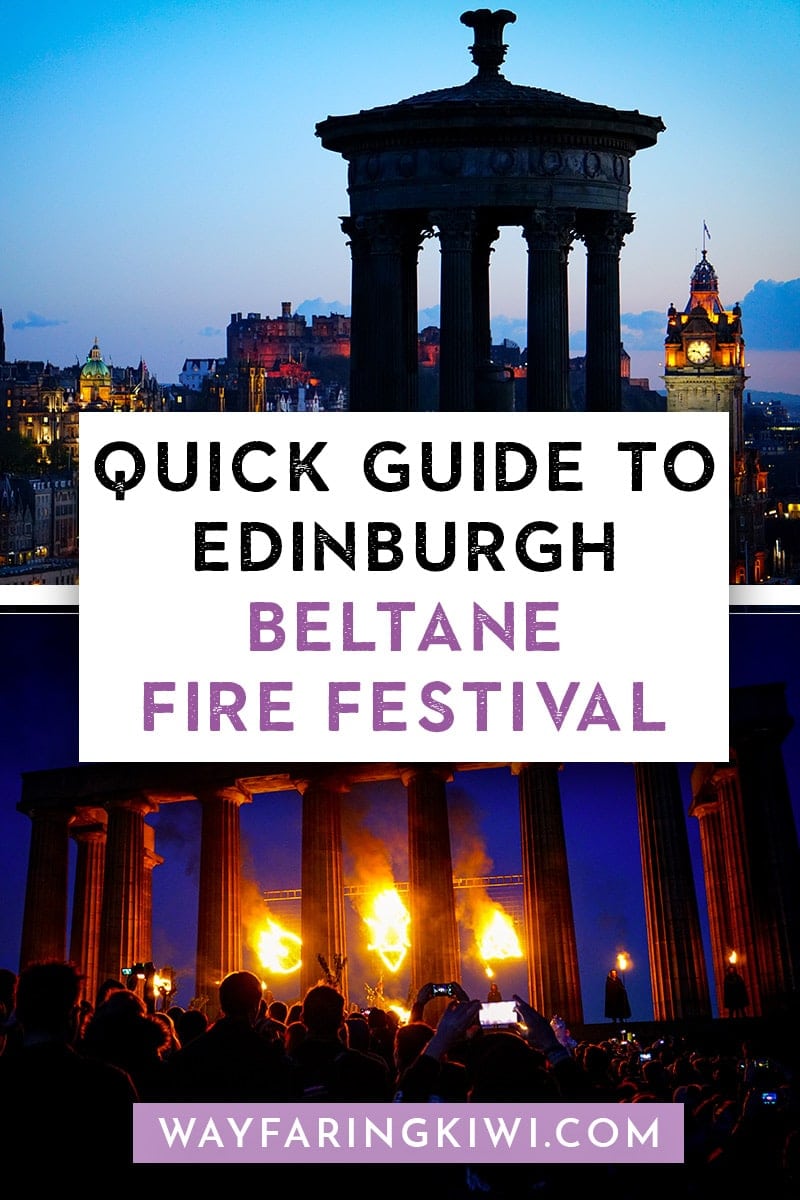 What is the best way to celebrate the arrival of summer in Edinburgh?

This and much more is at the center of the Edinburgh Beltane Fire Festival, a modern reinterpretation of the ancient Celtic ritual to ring in summer, put on by the Beltane Fire Society. The festival falls on April 30 each year, and has been held in Edinburgh since 1988.

As a new resident living in Edinburgh, I was interested to experience the Celtic take of the ritual that established its roots during the Iron Age. When I heard the event was being held on Calton Hill at sundown, with the impressive backdrop of Arthurs Seat to the east and Edinburgh’s towns of old and new to the west, I was sold.

A sneak peak of the Edinburgh Beltane Fire Festival

Happy Beltane to you all. Thank you for coming with us on this digital journey through our Beltane Fire Festival. It’s been a fun experiment putting it together, and we hope you enjoyed it. The bonfire is lit. The Green Man (pictured here by Vince Graham) stands by the May Queen. Summer has begun. Now head over to IGTV, where our co-founder Angus Farquhar is about to present the Beltane toast. ⁣ ⁣ ? Vince Graham for @beltanefiresociety. All rights reserved.⁣ ⁣ #beltanefirefestival #bonfire2020 #festival #firefestival #edinburgh #igedinburgh #celtic #pagan #heritage #scotland #summerfestival #whatsonedinburgh #selfisolation #quarantinelife #onlinefestival

What happens at the Beltane Fire Festival?

So what goes on at the Edinburgh Beltane Fire Festival? To understand the ritual a little better, it’s best to delve into the past.

In ancient times, Beltane saw members of communities come together to celebrate the return of summer and fertility of the land. It also would have been a time when they put their stock out to pasture.

Beltane roughly translates to ‘bright fire’ which is the central theme of the celebration. Farmers would ‘cleanse and protect’ their animals by leading them around a fire (not through, thankfully).

Beltane is also a celebration of another type of fertility (which explains the impressive half-naked acrobats smothered in red paint).

During these times where the community’s sustenance depended on the fertility of their land and the well-being of their livestock, it makes perfect sense they celebrated the arrival of summer.

So with all this in mind, I joined my friends and we made our way to Calton Hill.

The festival started at sundown, first with the lighting of torches at the National Monument. I’d stepped back in time into another world. The beating of drums stirred up animal excitement in the festival participants and the crowd, and the procession began.

It was led by the May Queen, who represents purity, strength and growth; she is followed closely by the Horned God, who represents the life that grows on earth. They lead a cavalcade of colourful and mischievous characters representing earth, fire, water and air. The procession made their way anti-clockwise around Calton Hill where they eventually arrived at a huge bonfire.

The journey is complete. After a vivid and fiery journey around Calton Hill, the Green Man has been resurrected and stands ready to rule over Summer at the May Queen’s side. Here Martin McCarthy captures the two of them poised by the bonfire, which once lit will represent the rebirth of the Summer season. ? Martin McCarthy for @beltanefiresociety. All rights reserved. #beltanefirefestival #bonfire2020 #festival #firefestival #edinburgh #igedinburgh #celtic #pagan #heritage #scotland #summerfestival #whatsonedinburgh #selfisolation #quarantinelife #onlinefestival

It was fun to pretend I was living in pagan times, but reality put its hand up as I marveled at the costumes and make-up and realised that plenty of hard work had gone into this event.

The festival finished with the performers dancing and cheering in a sea of red and white as the Horned Man is ‘reborn’ into the Green Man [think of roots growing into grass], so he and the May Queen can be together.

Overall, the Edinburgh Beltane Fire Festival is a unique experience for the open-minded or those interested in pagan traditions. It is popular with locals and tourists alike, and delves deeper into the past than any other festival in Edinburgh.

Put April 30 in your calendar for next year!

Looking for more things to do in Edinburgh?

Yvette Is the Beltane festival called something else? I'm trying to find information and not having much luck. ~Shellie

I've only known it to be called the Beltane Festival (regarding the Edinburgh one). Here is their website- I hope it helps! https://beltane.org/