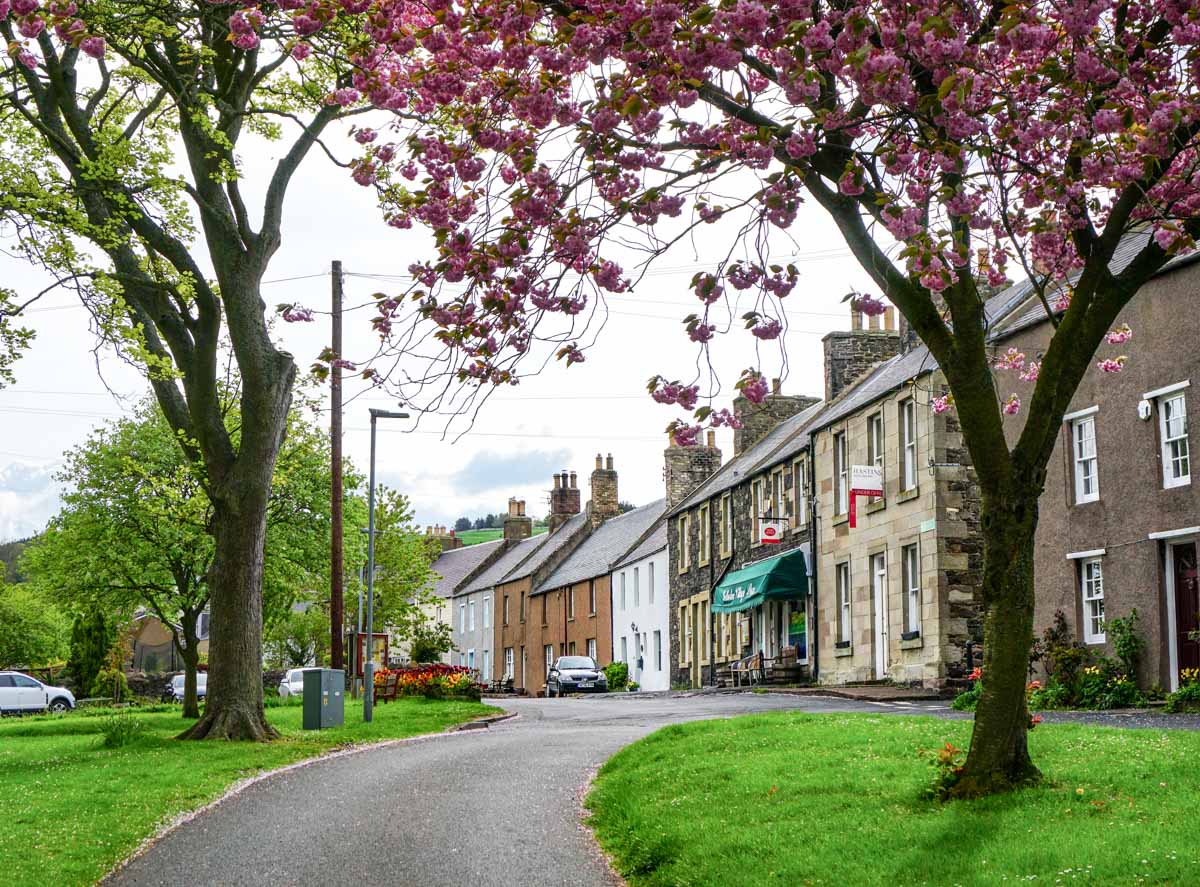 Next to the village of Kirk Yetholm, England ends and Scotland begins. Less than a mile away lies its twin village, Town Yetholm.

Located in the region of the Scottish Borders, the Yetholm villages are connected by a country lane and separated by the Bowmont Water that runs between them.

Yetholm translated to English means ”gate town,” therefore the villages are the gateway from England into Scotland, and vice versa. The border is walking distance at just 1.6 kilometres away.

Kirk Yetholm is popular with walkers, especially those hiking the Pennine Way, St Cuthbert’s Way or the Scottish National Trail.

In fact, Kirk Yetholm is the official endpoint of the Pennine Way, halfway point of St Cuthbert’s Way, and the start of the Scottish National Trail. Most of its visitors you meet there will be hikers, so you’re bound to have interesting conversations when you visit.

Its twin village, Town Yetholm, is located less than a mile down the road, and is larger and a more residential area. It is also where the Yetholm Village Shop and petrol station are located.

The villages of Yetholm are tucked away from the main roads that lead into Scotland, framed by the Cheviot Hills to the east.

They are known for their traditional thatched cottages and houses, and for once being home to the Romani people, locally known as the Yetholm Gypsies.

With its colorful history, quirky accommodation, busy pubs, and miles of sprawling farmland, the Yetholm villages are just a 1.5 hour drive from Edinburgh, and they make the perfect off-beat Scotland nature escape.

History of the Yetholm Gypsies

The villages of Yetholm was once home to Romanichal Travellers [Gypsies] of Scotland. They even had a royal family, the Faa family, who occupied the Gypsy Palace in Kirk Yetholm. The title later passed onto the Blyths, when the King’s brother-in-law who was married to Etty Faa, seized the throne. They were known as the Faa-Blyths.

It’s believed the land was gifted to the Gypsies when their ancestor saved the life of a soldier who owned the lands. They lived in Kirk Yetholm from the early 1700s to the 1900s.

They made a living as travelling traders, selling goods including pottery mugs [muggers] and tinware [tinkers]. They also smuggled whisky and gin across the border.

They would graze their ponies and donkeys on the Kirk Yetholm Common Land between the village and the English Border.

By the 1830s, there were around 80 Gypsies living in the Yetholm villages; many of the Gypsies began to move around the Scotttish Borders, due to lack of food resources during the winter in Yetholm.

Their clothing went from one extreme to the other; they often dressed in raggedy, dirty clothing during the day. But when they dressed up- they wore bright colours and extravagant gold and silver jewellery.

It’s thought that the reason they dressed so poorly was to indicate impoverishment to encourage folk to buy from them, as they were known to take part in ablutions [ceremonial washing in cold water] every day!

The most well-known Gypsy royal was Queen Esther Faa Blythe. She was the daughter of King Charles Blythe I, and won the title of ‘Queen of the Gypsies’ after winning a fight against her sister. The queen was well-liked and admired, attracting many visitors from afar. She married another Gypsy called John Rutherford, who was transported for theft in 1847. Queen Esther had her own criminal record, but she was witty and charming. She died a pauper in Kelso, however many people flocked to her funeral.

Her son, Charles Faa Blyth, was the last king of the Gypsies. He was crowned in 1898 in front of a crowd of 10,000 spectators. A hare was placed around his neck and a bottle of whisky was ceremoniously cracked over his head to mark the occasion.

He died four years after his coronation in 1902. The gypsies have since intermarried with the locals and are no longer a separate ethnic minority.

Did you know: The Young, Gordon, Fleckie, Blyth, Baillie and Douglas families who descended from the Scottish Borders have blood links with the Yetholm gypsy families.

Things to see and do in the Yetholm Villages

The Gypsy Palace is one of Scotland’s most quirky and unique attractions. Located in Kirk Yetholm, the small white cottage was built for Queen Esther Faa Blythe [1861-83] and passed on to her son and heir, King Charles Faa Blythe [1898-1902].

The Gypsy Palace has been converted into accommodation that sleeps 2-4 people!

The Kirk of Yetholm

When visiting Kirk Yetholm, I recommend taking a stroll through the Kirk of Yethom grounds. There are some interesting headstones from the 17th century, and it’s believed that fallen soldiers from the Battle of Flodden in 1513 are buried here.

A church has stood on this site since David I established a number of parishes in the Scottish Borders. The current kirk was built in 1837 to replace a small thatched church. The Kirk of Yetholm is a rectangular-shaped Gothic church made from local whinstone with cream sandstone dressings. It also has a tower to the south, and the medieval bell is still in use. It underwent remodeling in the 1900s.

Go on a walking tour of the thatched cottages

The villages of Yetholm have some beautiful cottages with thatched roofs. I’ve marked a couple of my favourite cottages on the map at the conclusion of this guide. I recommend you take yourself on a self guided walking tour and get to know the local life in the village.

Wideopen Hill is a small but challenging hill at 400m. It’s the highest point on St. Cuthbert’s Way, and marks the half way point from Melrose to Holy Island. The view from the top offers spectacular views of the Eildons in Melrose and the Cheviot hills. It’s a great spot to have a picnic while enjoying the beautiful scenery of the Scottish Borders.

Walk to the Scottish/English Border

Follow the Pennine Way in reverse to reach the border, which is marked by a stone wall. It’s around 2.5 kilometers from The Border Hotel to reach the border, and you will walk through hilly farmland, so wear proper hiking boots. Make sure you grab a photo with one foot in Scotland and the other in England!

If you follow the Pennine Way to the Scotland/England border- you’ll come across the Gypsy Stobs or Stob Stones. These large stones mark the spot where the Gypsy kings and queens were crowned. From the Gypsy Stobs you’ll have views to the west of South Scotland. You can find the exact location of the Gypsy Stobs on Ordnance Survey Map OL16 The Cheviot Hills.

The villages of Yetholm are both quite small, meaning there aren’t a lot of hotels and B&B’s to choose from. The selection that is on offer, however, is excellent!

The Border Hotel is where I stayed when I visited Kirk Yetholm- and what a bonnie place it is! It’s very popular with walkers of the Scottish National Trail and St Cuthbert’s Way. It’s the official endpoint of the Pennine Way. You’ll find plenty of friendly walking enthusiasts staying here, especially in the warmer months. The pub at the Border Hotel is also one of my favourite pubs in Scotland. It’s hugely popular with locals- so you can expect to have a good chin-wag with them too! Highlights include:

The Plough Hotel is located on the High Street of Town Yetholm, opposite the Yetholm Village Shop. The pub and restaurant is usually buzzing with locals. Highlights include:

The Mill House B&B is an 18th century converted Grain Mill. If you’re looking for a traditional Scottish bed and breakfast, you will love The Mill House! Highlights include:

As I mentioned before, you can actually spend a night or two in the Gypsy Palace! It’s a two-bedroom cottage that can sleep up to 4 people, however, it is better suited to couples. Highlights include:

Burnsyde is a holiday home with three-bedrooms, making it perfect for groups or families visiting Kirk Yetholm. Highlights include:

Disclosure: My accommodation at The Border Hotel was provided free of charge in exchange for photography services. I was not required to write about the hotel in this article- but I did because I thoroughly recommend it!