A Guide to the Historic Village of Mid Calder 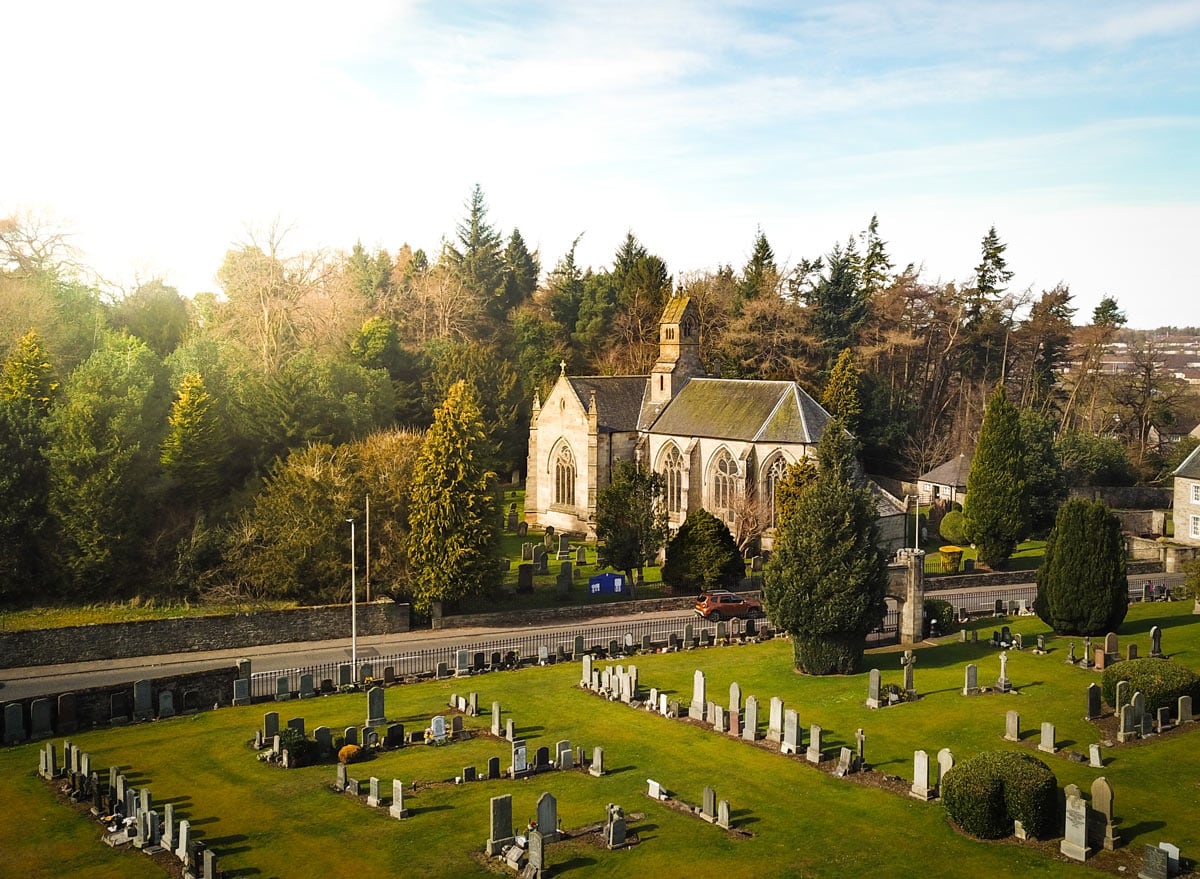 Mid Calder is a small, charming village located in the West Lothian countryside, just 15 miles west of Edinburgh. It is located on a rounded hill next to the River Almond, surrounded by the Calder Wood. There is an abundance of walking trails in and around the village, and a variety of wildlife including birds, foxes and deer.

Mid Calder was established way back in the 11th century- and it is where we call home in Scotland!

The Haggis has lived in Mid Calder his entire life, and I’ve been living here for the past two years.

It’s located next to Livingston, a popular commuters town to either Edinburgh or Glasgow established in the 1960s. Before Livingston existed there were several small villages dotted throughout West Lothian, and Livingston now links them together.

So while we technically live in Livingston, Mid Calder sits on the eastern edge of the town, and was once a small village surrounded by forest and the countryside.

Interesting fact: Livingston is known as a slightly rough area and it’s often the butt of many jokes in Scotland. The local football team is known for having players that have been plucked from jail, including their manager who used to be a drug dealer and spent some time in jail during his youth!

Can you travel to Scotland yet? Read my Covid-19 guide that is updated every week with the current information.

Mid Calder on the map

Fun fact: The Haggis’s immediate family, and his best friends since primary school all live in Mid Calder. It takes us less than 10 minutes to walk to all of their houses! It’s not uncommon for Scots to spend their lives in the village or area they grew up in.

The History of Mid Calder

As I mentioned before, Mid Calder was established in the 1000s. It was once one of Scotland’s most important thoroughfares for Highland cattle drovers selling their cattle at markets in Falkirk and Crieff. The cattle were then transported south to England, and Mid Calder was an important stop to rest and rehydrate at one of the several public houses in the village!

Mid Calder was also where many witches were burned at the stake. There is a small hill with a cluster of trees called Cunnigar Hill [see image below], known as Witches Hill to the locals, located close to the village center. In 1591, the village Minister, John Spottiswoode accused many women of witchcraft and sentenced them to be executed. He wrote in his diary at the time: “Much of the winter has been spent in the discovery and examination of witches and sorcerers.”

Witchcraft trials took place in the Kirk of Calder, which still exists today.

One story about witches in Mid Calder involved 12-year-old Patrick Sandilands, the son of James, 7th Lord Torphichen. In 1720, the boy claimed that several old women and a man had bewitched him causing him to be lifted in the air by ”invisible hands.”

Lord Torphichen arrested many locals, including five who eventually confessed to being involved. By the 18th century, execution for sorcery had gone out of fashion, so the witches were reprimanded in church and then set free.

Another story that is well-known to locals is that of Lizzie Bryce. Lizzie Bryce [born Elizabeth Baxter in 1776] grew up in Mid Calder, attending the parish school. As a young woman she worked on a local farm, and married Alexander Bryce in 1799. They have five children together, including one that died as a young child. The family lived in a small white cottage near Calder House.

In 1861, Alexander died, and Lizzie lived with her daughter, Elizabeth, who was also a widow. To make ends meet, the two women took in pauper children from Edinburgh. The women received money from the state to foster the children, and in her age, Lizzie Bryce became confused and short-tempered.

Lizzie was a tall and angular woman, and was noted for not being the kindest foster mother; she would shout at local children and scare them, and the children called her a witch. She died in 1865, age 89, in her cottage. In the 1890s, the Raw Strip where Lizzie kept her cows, became known as Lizzie Bryce’s Strip. A pub in nearby Dedrige was also named after her [it has since closed down and has been demolished].

Today the roundabout leading into Mid Calder is called the Lizzie Bryce roundabout. There is a statue of a witch’s hat the stands in the middle!

Many think that Lizzie Bryce was one of the Mid Calder witches that were burned at the stake [including The Haggis- until I corrected him!] however, she was just a wee old lady who became decrepid with age.

In the 1840s, railway construction began, and the drove roads were no longer used. Shale oil was discovered within West Lothian, leading to the world’s first oil boom, which meant the village continued to thrive, rather than fall into disuse.

Mid Calder is now a Conservation Village and home to two pubs- which is still quite a few when the population is less than 4,000 people! It is a sought-after area to live in, seeing as it is close to both Edinburgh and Livingston, but still has a traditional village feel.

Our favourite things to do in Mid Calder

There are plenty of things to do in Mid Calder- I’m still discovering new walking paths after living here for over two years! I’ve included my favourite things to see and do below, as well as what makes these attractions so interesting.

Be sure to watch my vlog episode that goes with this guide for a virtual tour of Mid Calder. Make sure you subscribe to my YouTube channel for similar vlog episodes in the future.

The Kirk of Calder is the main church in Mid Calder, and it has a fascinating history. The current church was built in 1541 and extended in 1863, but it’s believed a church has lived on the present site since 1150.

In 1560, the Reverend of the Kirk, John Spottiswood, a staunch Reformist, helped John Knox draw up the Scots Confession of Faith at the height of the Reformation. A portrait of Knox hangs inside the church.

The son of John Spottiswood, also John, became the Archbishop of St Andrews and went on to crown Charles I at Holyrood in 1633.

You can still see bullet holes on the outside walls of the church from when it came under attack from Royalist forces following the signing of the National Covenant in 1638, when Scottish Presbyterians protested against King Charles I’s enforced imposition of his Book of Common Prayer.

The area around Mid Calder was a hotbed of revolt against the King. Ministers were forced to hold illegal open-air services, known as Conventicles, in the hills around the village.

Other famous faces that have worshipped at the Kirk of Calder include the composer Frédéric Chopin, Scottish chemist James ‘Paraffin’ Young, and the explorer and missionary Dr. David Livingston.

Located near the Kirk of Calder is Calder House, a 16th-century mansion. It has belonged to the Sandilands family [Lords Torphichen] since they were gifted the lands in 1348!

It is said that John Knox, who was a great friend of the first Lord Torphichen, performed his first Protestant ceremony in the great hall of Calder House after the Reformation had taken place. The Lords Torphichen were supporters of the Scottish Reformation during the 17th and 18th centuries, however the house doesn’t appear to have suffered any damage as a result.

The Sandilands still live in Calder House today, and while you cannot go inside Calder House, you can marvel at it from afar on Main Street, opposite the primary school.

One of our favourite things to do is take Angus for a walk in the Almondell and Calderwood Country Parks. One of the best things about living in Mid Calder is that we have nature right on our doorstep! There are plenty of easy walking trails- so many that I still get lost- but more importantly, I’m never bored!

There is plenty of wildlife to spot, including a heron that nests in the pond near Calder House, and many more birds. Here’s a list of wildlife we’ve spotted so far:

One of my favourite walks is the circuit around Calderwood. Click here for the directions on Walk Highlands.

How to get there

The closest train station to Mid Calder is Livingston South. You can reach this station directly from both Glasgow Central and Edinburgh Waverley stations. From there, jump on bus X27 to be dropped off in the village. Bus X28 serves Mid Calder from Edinburgh.

Because Mid Calder is such a small, residential village and not a tourist destination, there isn’t really any accommodation here. There is one property on Airbnb that sleeps two people- it’s an old dairy from the 17th century that has been converted into a house.

There is also accommodation available in nearby Livingston. I recommend:

Known as ”The Black Bull” to locals, it’s is easily my favourite pub in Mid Calder; traditional, local, warm and friendly- it’s the perfect place to go on a Saturday night for a few drinks and have a casual lunch with friends on Sundays.

The Fork and Field was the most stylish pub in Mid Calder, located in a beautiful historic country inn, built in 1763. Behind the Fork and Field is the leafy backdrop of Calder Wood. It underwent an extensive renovation from inn to a gastropub and it has a tasty menu and a great cocktail list. Sadly due to the pandemic, it has closed and the pub is now up for lease.

The Mid Calder Inn [The Tapshop]

Of all of the pubs in Mid Calder, The Tapshop is the most relaxed pub. It’s a simple-looking pub, and it certainly doesn’t try to impress, however, if you’re after a cheap drink and local banter, stop by for a pint.

Kushis does delicious Indian food- if you love Korma, I highly recommend ordering that dish when you visit Mid Calder! Eating in is definitely better than having it takeaway [my personal experience].

Known as La Vita by locals, this popular restaurant in Mid Calder serves amazing Italian food. It has all your Italian favourites- pizza, pasta etc and has a lisencsed bar. I recommend the pizza or one of the kebabs- the meals are huge, fresh, and delicious!

Toninos is the local chippy that also sells pizza and kebabs. While they don’t have the best fish and chips I’ve tried in Scotland, they are popular among locals.

Do you have a question about Mid Calder? Ask in the comments!