8 reasons to visit the Scottish village of Killin 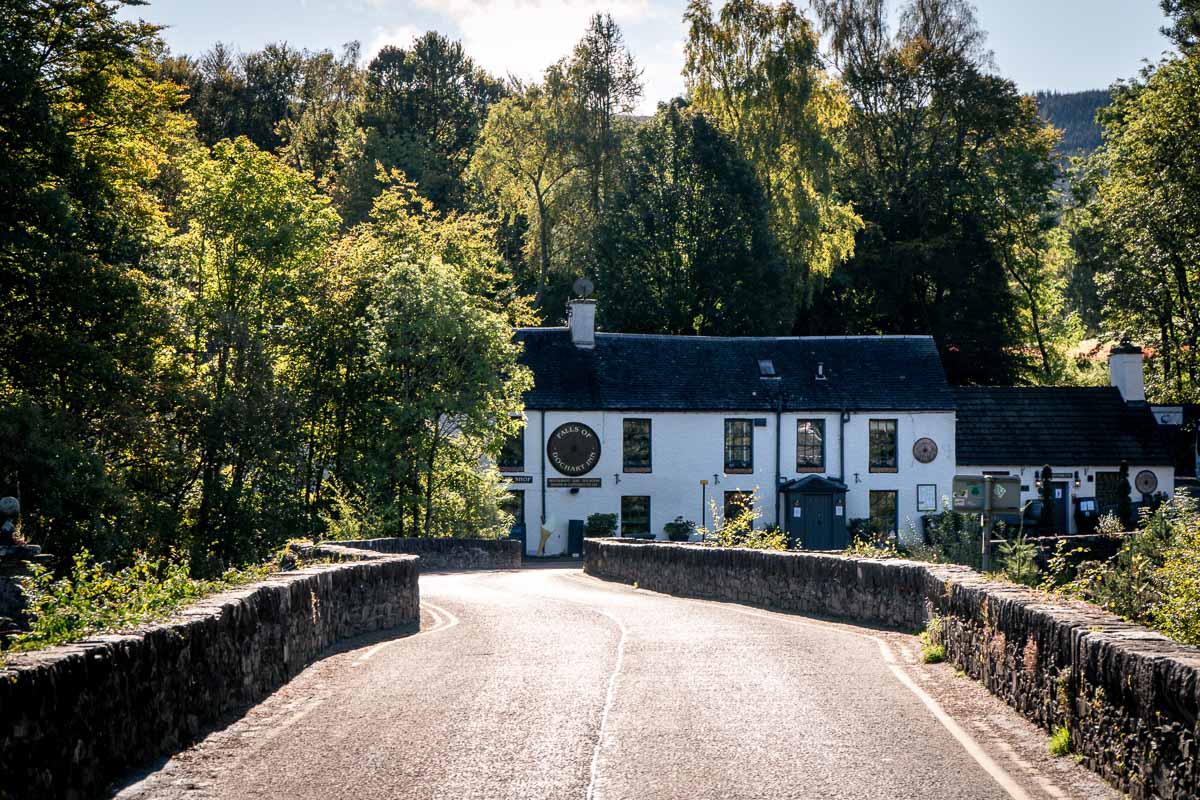 It’s no secret that I love the Scottish village of Killin.

Killin is located in the north-east corner of Loch Lomond and The Trossachs National Park. I first discovered this idyllic village when I needed to escape to the highlands to disconnect from my laptop and chill.

I returned to reality miraculously cured of all my ills, with a promise to come back and spend some more time exploring the village and the nature trails that surround it.

I did return, exactly one year later with my husband and pup in tow, and I fell even more in love with this historic wee village.

Here are 8 reasons to visit Killin, and why it needs to be on your Scotland bucket list.

8 Reasons to Visit Killin in Scotland

It’s easy to navigate on foot

Killin is a small village, so it’s easily navigated by foot with many of the key attractions and facilities within walking distance of each other.

Even when we stayed in a farmhouse on the outskirts of Killin, it took us just 20 minutes to walk into the centre of the village.

Also- drinking and driving laws are pretty harsh in Scotland, so being able to have a drink and walk back to your accommodation without having to organise a taxi or sober driver is one less thing to worry about.

>> Read more: How to plan a trip to Scotland

I’ll admit before I moved to Scotland I bought into the romanticism of the country, and expected the towns, cities and villages to look exactly as they did in the 1700s.

While the majority of villages in Scotland hold on to elements of their history, Killin really does look like a small, traditional village that could easily be used as an Outlander set.

Lets just say that Killin satisfies both the tourist and Outlander fan in me.

>> Listen to our Podcast episode about our favourite autumn breaks in Scotland!

The cascading Falls of Dochart are located in the heart of Killin, and after visiting the falls you can see why the Scots built a village around it.

The Bridge of Dochart that connects one side of the village to the other, was built from rubble stone.

>> Read more: What to pack for a trip to Scotland

It’s not as touristy as locations nearby

People often skip right past Killin without realising it’s there.

Why? Probably because they’re heading to tourist hotspots such as the Isle of Skye or Glencoe [overtourism in these areas is an issue]. But Killin is just as beautiful, and the fact that it’s quieter than those other locations makes it feel all the more special to me.

It has a badass castle

Finlarig Castle is now a picturesque ruin, but it has a pretty wicked history. It was built by ‘Black’ Duncan Campbell of Glenorchy in 1629 who had a penchant for hanging commoners on the oak tree outside the castle.

There’s also a rumour that the pit located next to the kitchen [which is now a ruin] was a beheading pit. Historians actually think it was used as a run-off for excess water, but I know which folk tale is more interesting.

It was also visited by notorious bandit, Rob Roy MacGregor, in 1713. I don’t know of a castle in Scotland that has this much street cred.

The abundance of gorgeous hiking trails [suitable for all abilities]

One of the best reasons to visit Killin is for the abundant hiking opportunities.

Located near Killin is Ben Lawers National Nature Reserve, home to the Munros Ben Lawers and Beinn Ghlas which can be bagged in one day.

The short but steep hike up Sron A’ Chlachain has one of the best views of Loch Tay, and there’s also the long-distance trail of the Rob Roy Way which passes through the village.

The autumn colours are gorgeous

Killin is a popular place for locals to enjoy an autumn break in Scotland.

It’s surrounded by nature, so it makes the perfect location to watch the foliage turn various shades of golden. Find yourself a spot to admire the Falls of Dochart with its autumn frame, or climb one of the many hills in Killin to see an overview of the colourful trees.

A lovely autumn drive I recommend is the circuit around Loch Tay. It takes just over one hour, and you may be lucky enough to spot red squirrels prancing across the road.

Killin is the perfect place to stay in Scotland with your furry friend. You can take your dog almost anywhere with you in Killin, and there are plenty of dog-friendly accommodation options available.

The Capercaille Restaurant, Shutters Restaurant and the Falls of Dochart Inn are dog-friendly restaurants we tested out with staff that all love dogs.

Indoor attractions Moirlanich Longhouse and the Scottish Crannog Centre (update: this sadly burned down in 2021!) are both dog-friendly, and of course, there’s an abundance of walking trails for you to enjoy with your dog.

Do you feel inspired to visit Killin now? Drop me a comment if so!