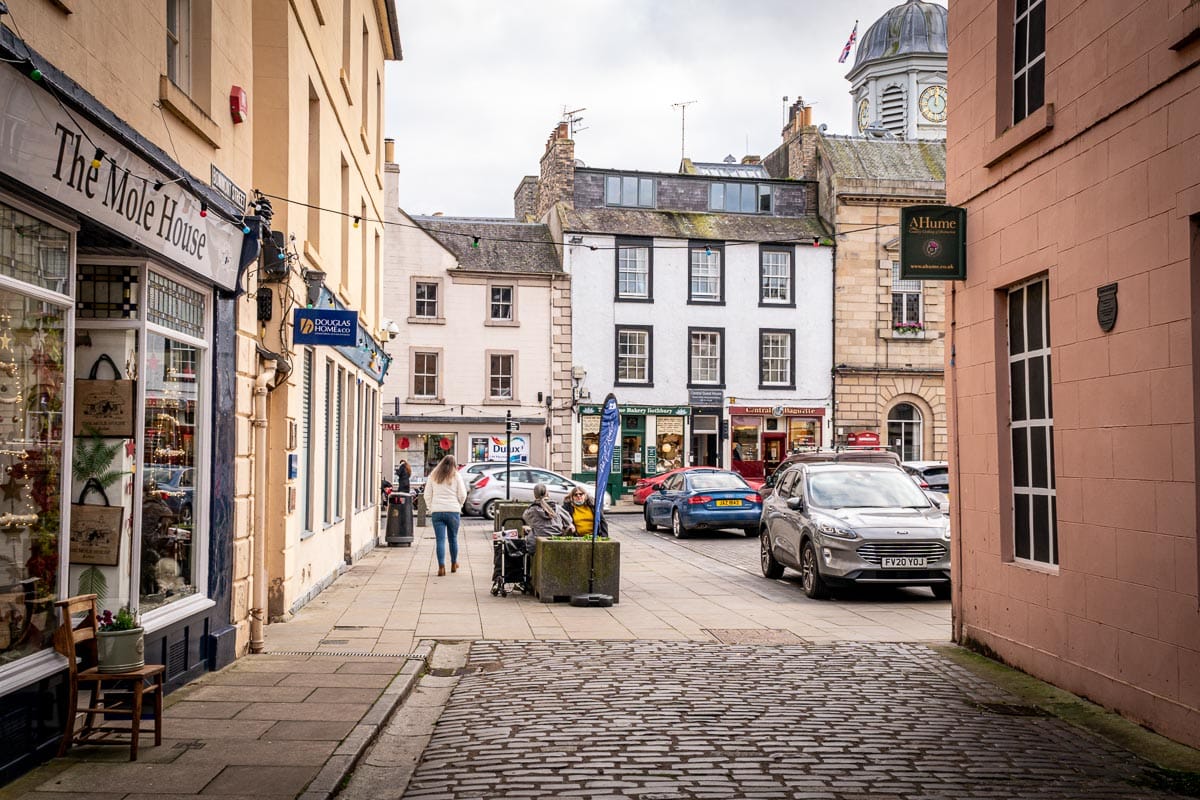 This region is incredibly rich in history- just think about it. The most logical route for the Romans (and those troublesome English troops who travelled north to invade Scotland) was through the Scottish Borders. The capital of Edinburgh is near the east-coast, and the sought-after Stirling Castle, key to the highlands, lies inland near the western end of the Firth of Forth. Both were common destinations for these mischievous foreigners.

This resulted in battles and skirmishes throughout the borders, with many fortresses erected to protect the people living there from attack. The English would often leave a trail of destruction when they departed Scotland!

So by now, you will see why there are so many hidden gems in the Scottish Borders- there are countless stories, battlefields, torched castle ruins, and trinkets left by those fleeing across the border.

I’m revealing four of my favourite hidden gems in the Scottish Borders that I think have an interesting story to tell. Plus I’m telling you my best tips for planning a visit here!

Want to know the most recent rules and travel restrictions in Scotland? Read my Covid-19 guide that is updated every week with the current information.

One of my favourite hidden gems in the Scottish Borders that I stumbled across while hiking was The Cheese Well and Fairy Well, found in the hills near Traquair.

Two stones mark the spot of the Cheese Well, which is a spring that has long been an important source of clean drinking water for travellers.

The Cheese Well gets its name from the custom of leaving small presents of cheese to thank and placate the fairies who protect the spring.

These days, travellers will often leave coins- superstition has it the fairies will grant you safe passage if you do so. So look closely into the spring and you may see tidbits left from previous travellers!

To reach the Cheese Well, from Traquair you follow the Southern Upland Way east. The Cheese Well lies on the northern side of Minch Moor [a hill]. The trails on Minch Moor are some of the oldest hill paths in Scotland!

The Southern Upland Way is a hike that crosses Scotland from coast to coast, taking you through history-filled areas in the Scottish Borders. I’ve hiked sections of it and I highly recommend it for anyone interesting in long-distance hiking trails!

Copy and paste the latitude/longitude text into Google Maps to find the exact location!

Traquair House is Scotland’s oldest inhabited house. It is filled to the brim with history: it originally was a defensive tower house and eventually became a luxurious family residence. It has been lived in for over 900 years and has been visited by 27 Scottish Kings and Queens!

The Stuart family has been living at Traquair House since 1491. Staunch Catholics, they were supporters of the Jacobite Risings of 1715, 1719 and 1745. It comes as no surprise that Traquair House often played residence to Jacobites. You can only begin to imagine the secrets whispered between the walls!

Traquair House was once also a royal hunting lodge. Mary Queen of Scots, who was a keen huntress, spent time here during her visit in 1566. Her bed and possessions can be seen at the house, including the cradle where she rocked her baby son, James, to sleep. He went on to become King James of Scotland [VI] and England {I].

Today, you can visit Traquair House and go on a tour of the residence. You can also stay here as they operate a bed and breakfast. They even have a brewery- the 300-year old Traquair House Brewery! You can sample their ales and also explore their shop and museum.

They also operate as an event space, so you can get married here. Occasionally they have events at the grounds, including a dog’s day out and Medieval Fayre weekends. You can check their website for more information.

Traquair House is located close to the start of the path that takes you to the Cheese Well and Fairy Well, so you could easily plan these two activities in the same day.

How to get there: The easiest way to reach Traquair House is by car, as it is quite remote.

But Kelso Abbey has its own wonders. It was founded by a community of Tironensian monks in the 1100s and was once one of Scotland’s largest and wealthiest religious houses.

Back then- it was a big deal! So much so that it was the chosen burial place for Prince Henry of Scotland [1114–1152] as well as several of the Dukes of Roxburghe.

In 1460, King James III was crowned at Kelso Abbey, after the death of his father James II at the siege of Roxburgh.

The Tironensians monks weren’t very popular in Scotland, however, they were held in high regard by David I due to their master craftsmanship. David I loved architecture and was responsible for founding more than a dozen abbeys in Scotland during his reign in the 11th century.

Because Kelso Abbey is located so close to the Scottish/English border, it suffered from various raids and attacks, particularly during the Wars of Independence in 1296.

By 1545 Kelso Abbey had been so badly damaged the only salvageable part of the abbey was the church. It remained in use as the parish church until a new one was built nearby in the 1700s.

The Abbey Church is considered one of the most spectacular examples of Romanesque architecture in Scotland. Today you can wander around what remains of it and only imagine what it would have looked like almost 1000 years ago.

The town of Kelso has been a subject of many artists and is a lovely place to spend some time in. There is a car park [see the map at the conclusion of this article for the exact location] which is sometimes free, close to Kelso Abbey. If you want to reach Kelso by public transport, Borders Buses have a bus that runs from Edinburgh.

Kelso is an easy town to explore on foot- enjoy time wandering around the cobblestone streets, where you will find plenty of cute shops in the town centre, There are also some neat historic pubs. I also recommend checking out the North Parish Church, and there is also a nice view of the River Tweed on an offshoot street [see map for exact location]. I recommend stopping for a coffee and a slice at the Hoot n’ Cat to rest your weary feet, before making your way back to the car or bus.

The Cross Kirk was founded when a stone urn, containing what was believed to be the relics of St Nicholas, was discovered on the site. A fine cross was also discovered, and the site was soon associated with miracles.

Alexander III paid for the first church on the site. It housed the cross and shrine of the saint and remained a pilgrimage centre until the 17th century.

The English set fire to the Cross Kirk in 1549, but it was later repaired. The church was abandoned and unroofed in 1784, and by 1811 much of the south wall had fallen.

Fragments of bone were discovered buried underneath the cyst in 1924, leading archaeologists to believe this was St Nicholas’ grave!

The Cross Kirk is fenced in, so it’s the perfect ruin to explore with children or a dog. Angus loved running around the ruin, sniffing every nook and cranny, while I admired the massive structure from every angle. The Cross Kirk is one of my favourite hidden gems in Scotland, and a great site to photograph.

WHO WAS ST NICHOLAS?

St Nicholas of Myrna was an early Christian Bishop from [what is now] Turkey. He was alive in the early 300s during the time of the Roman Empire. He was known for his piety and charity, and after his death many miracles became associated with him. He is the patron saint of sailors, children, wolves and pawnbrokers. And yes- this is the same St Nicholas that was the inspiration for Father Christmas! So now you can wow your friends with the fact that the real St Nick is buried in Peebles in Scotland! But maybe don’t say anything if there are any children around…

Be sure to explore Peebles

If you enjoy travel off the beaten path, I highly recommend spending a night in Peebles. It’s more popular with locals than tourists, and it’s also my Scottish mother-in-law’s favourite town in Scotland! And my mother-in-law has great taste.

The town of Peebles is also a gorgeous small town to explore; there are some great art and crafty stores, cute boutique shops and classy yet relaxed pubs and restaurants.

For accommodation, I recommend:

For lunch, I personally like The Crown Hotel Restaurant [see map] which has excellent food and a bar in a traditional setting.

How to get to Peebles: Driving from Edinburgh takes just 45 minutes. There are also buses from Edinburgh, or you can catch the train to Galashiels and then ride the bus to Peebles from here.

>> You might enjoy my other posts about the Scottish Borders

A day trip to St Abbs
Kirk Yetholm and Town Yetholm: Scotland’s answer to the Cotswolds

Do you have a question about visiting the Scottish Borders? Or any recommendations yourself? Pop a comment below and intereact!