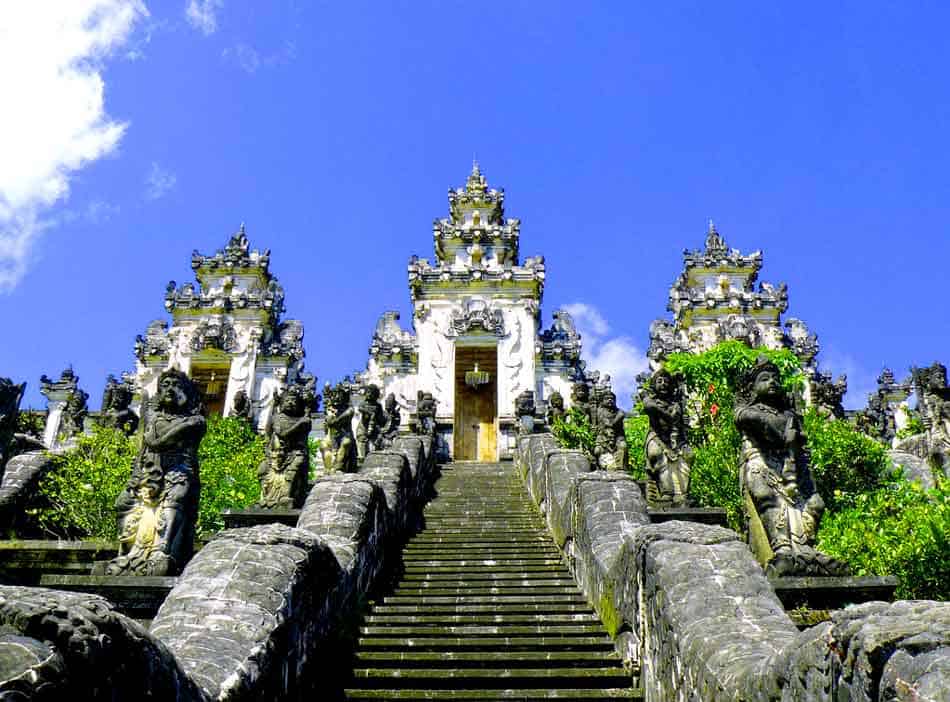 One of the most difficult challenges I face on a daily basis is getting out of bed at a reasonable hour. This was no problem in Bali, seeing as we were now five or so hours behind New Zealand time. This gave myself and my travelling companion Libby an opportunity to grab buffet breakfast at the hotel before the late risers.

The food that was spread out in front of us was stupefying; every kind of breakfast meal imaginable was laid out on plates, in baskets and chafing dishes. Pancakes, pinwheels, croissants, egg friend rice, sausages; assortments of mango, papaya, pineapple and watermelon were cut and laid out delicately; water, juices, teas and coffees were waiting to be poured by doting Balinese.

After stuffing ourselves and folding French pastries into napkins for later, we spilled onto the street in search of a taxi to take us to our first activity.

Several men shouted at us from across the street: “Darling, you need a taxi?”

This is what the Balinese do in order to gather your attention- they shout and they don’t stop. It’s harmless behavior, however, if you’re not used to it, it can be quite unsettling.

Here’s a tip- if you’re not interested, don’t say anything. I found they tend to leave you alone if you don’t respond, or mutter a quick “no, thanks.”

Visiting Bali for the first time? Read this!

The Cooking Class you HAVE to try in Bali

Another thing is be comfortable with your mistakes; you’re bound to be ripped off at least once when haggling.

We were when we followed a wiry Balinese man down an ally to where he parked his taxi-ute. Agreeing on the amount of 50,000 rupiah ($6.50 NZD) to take us to Waterbom Park, a drive of around ten minutes. We found out we had been tricked when talking to a group of Australians later that day who had traveled a similar distance for only 30,000 rupiah ($4 NZD).

Still, it was only a few dollars difference, and cheap nonetheless.

“I’m not annoyed,” Libby said. “We’re putting money back into their economy.”

Waterbom Park was vast and littered with tourists. Located in Kuta, it has 21 water slides of different speeds and sizes over 3.8 hectares of land. It was voted the number one tourist attraction by Trip Advisor, so this place was high on our to-do list.

Right we were by choosing this as our first activity, as nothing was more refreshing in mid-thirty degree heat than rippling down slides at up to 70km into cordial emerald waters.

We tackled the slide aptly named the Boomerang first, with a speed rating of four, a drench rating of three, and a thrill rating of five. I can honestly say it was in the top 10 of ‘Yvette’s most terrifying experiences ever experienced’.

We curved left, then right, before plunging steeply down. Our double-ringed donut then shot out of the warren into the open, and my worst fears came true: we were traveling skyward up a skateboard ramp. I thought we were going to sail off the end of it, but gravity brought us back down again, and my breathless chest leapt to my tonsils as we soared backwards down the ramp into the pool.

The Boomrang wasn’t the only terrifying experience of the day: I learnt I had a formidable fear of fish. One of the pampering booths featured a fish spa, something I liked the idea of, but hated when it came to dipping my toes into a tank full of skin-craving, sucky-mouthed fish.

I cried out a few “fucks” and “I’m only doing this for the sake of journalism!” while Libby told me to get over myself, and the Baliense attendants sauced themselves with laughter.

When a little girl sat beside me and dipped her toes in, I gathered my courage, bit by bit. First went my heels, then my soles. The fish deserted Libby’s now silky smooth feet, and gleefully wiggled towards mine. I expected it to hurt. I expected to rip my feet from the water at the first sign of discomfort.

It tickled. I moved my legs gently in the water as the little fishes greedily sucked to their gills content. They feasted on the webbing between my tense toes. I swear one of them even guzzled down my worn nail polish. When I peeled my feet from the tank they felt soft and smooth. Not a bad treatment for 75,000 rupiah ($9 NZD).

On our way back to the hotel (30,000 rupiah in a metered Bluebird taxi) we decided to grab an early dinner and treat ourselves to some cocktails. It was a nice way to end a relaxing and thrilling day in the sun.